Crawley Housing Crisis? Only 1.4% of Crawley Homes Are For Sale


The Crawley Property Market continues to disregard the end of the world prophecies of a post Brexit fallout with a return to business as usual after the summer break.

The challenge every Crawley property buyer has faced over the last few years is a lack of choice – there simply hasn't been much to choose from when buying (be it for investment or owner occupation). Levels are still well down on what would be considered healthy levels from earlier in this decade, as there is still a substantial demand/supply imbalance. Until we start to see consistent and steady increases in properties coming on to the market in Crawley, the market is likely to see upward pressure on property values continue.

For example, in last few months RH11 has seen an average of 115 new properties coming on to the market, not bad when you consider within the last year the average has been as low as the mid 70’s. With the average Crawley property value hitting a record high, reaching almost £321,300 according to my research, this shortage of properties on the market over the last two years has contributed to this ‘fuller' average property figure, but there is a glimmer of hope that the Crawley's supply crisis may be starting to ease. 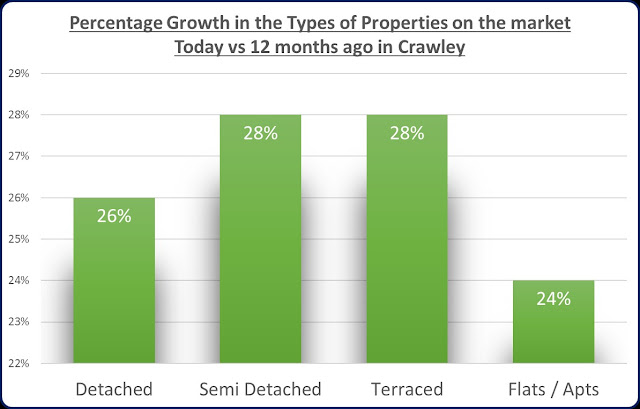 With realistically priced properties flying off the shelves and this increase in new properties, this is evidence of strength in the Crawley housing market that many didn't expect.  Many believed that the Crawley property market wasn't going to be strong enough post Brexit - as what was a sellers' market before the Brexit vote and Buyers' market in the early months after it, may now be somewhere in between and the market might just be coming back into balance.

However, all this will mean property values won't continue to grow at the same extent they have been over the last 12 to 18 months, and in some months (especially on the run up to Christmas and early in the New Year), values might dip slightly. This won't be down to Brexit but a re-balancing of the Crawley Property Market – which is good news for everyone.
Posted by Unknown at 15:28