Whether you are a landlord, homeowner or tenant, it’s always important to keep an eye on the Crawley property market, not just from your point of view, but also from every player’s point of view. Over the last 12 months, 1,458 properties have sold (and completed) in Crawley, worth £434.6m. Interestingly the number of properties changing hands in Crawley has also dropped when compared to a decade ago.

It might surprise you that first time buyers in 2017 will benefit from a slight decline in Crawley buy-to-let investors.

Those looking to buy a home in the spring and summer of 2017 will face a far less competitive Crawley property market than the same time of year in 2016, when the urgency to beat the buy-to-let stamp duty hike was in full swing.

Many landlords brought forward their purchases to beat the tax, and since then, the number of buy-to-let purchases has dropped slightly. First time buyers have taken advantage of that and have increased their buying. In fact, looking at the Bank of England figures, this is what UK lenders have lent on buy-to-let properties versus first time buyers over the last 12 months  … 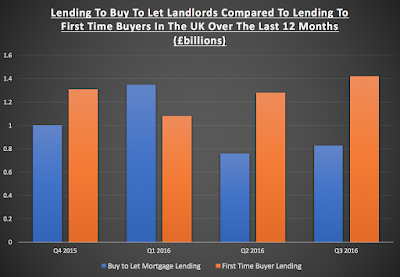 When looking at the figures for Crawley itself, first time buyers have borrowed more than £70.08m in the last 12 months to buy their first home. This is a ringing endorsement of their confidence in their jobs and the local Crawley economy. Those 20 and 30 something’s who are considering being first time buyers in 2017 will find that the number of properties on the market has never been as good as it has for quite a while, meaning you have more choice of properties and less competition from so many buy-to-let landlords than a year ago.

Rightmove announced nationally that new seller enquiries are 26% up on the same time last year giving the stoutest indication that we may see a slight ease in the lack of properties on the market. When I look at Crawley, at this moment in time there are 286 properties for sale, compared to 337 properties a year ago. All this will be welcome news amongst Crawley first-time buyers with a combination of a proportional reduction in new investors and landlords.

2017 will be an interesting year for all homeowners, be they buy-to-let landlords, existing homeowners or future homeowners.
Posted by Unknown at 11:27