Hard Brexit could cause 2,000 properties to be dumped onto the Crawley Property market


So all cards up in the air! A general election will be on the books, but one thing is for sure ... whoever gets the job to deal with Brexit has a hard job on their hands.  As it currently stands, by not assuring the rights of EU citizens in the UK, Theresa May has not given peace of mind to our EU co-workers working and living in Crawley (and the rest of the UK). No.10 Downing Street’s point of view is that in promising the rights of EU citizens in the UK, it will postpone the same guarantee to the 1.5 million UK citizens living in the other nations of the EU.

Now Article 50 has been triggered, we have two years to make a deal with the EU; otherwise it will be a ‘hard Brexit’.  Now you might not think a hard Brexit will affect you in your home in Crawley ... but the truth could be very different.

The rights of these EU citizens living in the Crawley area are not guaranteed and may be part of the negotiation with Europe.  A lot of our EU next door neighbours in Crawley will have acquired rights relating to the right to live, to work, to own a business, to possess a property, the right to access health and education services and the right to remain in a UK after retirement… yet those acquired rights are up for negotiation in the next two years.

So, what would a hard Brexit do to the Crawley property market? 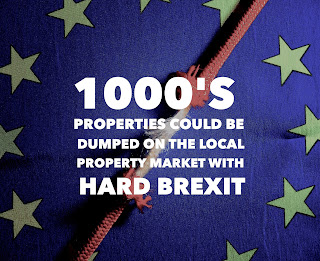 Hard Brexit and mass EU Migration could result in c. 2,000 properties being dumped onto the housing market in a short period of time, meaning there would be a massive drop in Crawley property values and rents, causing negative equity for thousands of Crawley homeowners and some landlords would be out of pocket.

While there is no certainty as to what the future will hold, both UK expats in the EU and EU citizens in the UK rights will no longer be guaranteed and will be subject to bilateral renegotiation.

All we can ask is that the politicians are sensible with each other in the negotiations. A lot of the success of the Crawley (and UK) property market has been built on high levels of homeownership and more recently in the last 10/15 years, a growth of the rental sector with lots of demand from Eastern Europeans coming to Crawley (and the surrounding area) to get work and provide for their families. Many Crawley people have invested their life savings into buying a buy to let property.

Much will depend on what is politically realistic. Knee-jerk reactions and measures caused by a hard Brexit would not only likely cause major disruption or suffering to the 3 million EU citizens living in the UK, but also everyone who owns property in the UK.
Posted by Unknown at 17:16