Should you buy or rent a house? Buying your own home can be expensive but could save you money over the years. Renting a property through a letting agent or private landlord offers less autonomy to live by your own rules, with more flexibility if you need to move.

Yet, there is third way that many people seem to forget, yet it plays an important role in the housing of Crawley people. Collectively known as social housing, it is affordable housing, which is let by either Crawley Borough Council or a housing association to those considered to be in specific need, at rents below those characteristic in the private rental market.

In Crawley, there are 10,229 social housing households, which represent 23.8% of all the households in Crawley. There are a further 1,324 families in the Crawley Borough Council area on their waiting list, which is similar to the figures in the late 1990’s. The numbers peaked in 2011, when it stood at 2,618 families, so today’s numbers represent a drop of 49.4%. 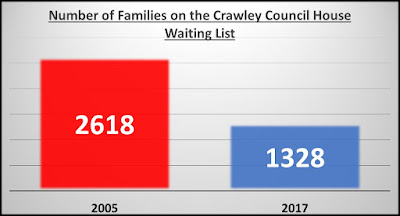 Nevertheless, this doesn't necessarily mean that more families are being supplied with their own council house or housing association property. Six years ago, Westminster gave local authorities the authority to limit entitlement for social housing, quite conspicuously dismissing those that did not have an association or link to the locality.

Interestingly, the rents in the social rented segment have also been growing at a faster rate than they have for private tenants. In the Crawley Borough Council area, the average rent in 1998 for a council house/housing association property was £202.76 a month, whilst today its £464.84, a rise of 129% in 19 years.

So, what does this all mean for the homeowners, landlords and tenants of Crawley?

Rents in the private rental sector in Crawley will increase sharply during the next five years. Even though the council house waiting list has decreased, the number of new council and housing association properties being built is at a 70 year low. The government crusade against buy-to-let landlords together with the increased taxation and the banning of tenant fees to agents will restrict the supply of private rental property, which in turn using simple supply and demand economics, will mean private rents will rise – making buy to let investment a good choice of investment again (irrespective of the increased fees and taxation laid at the door of landlords).  It will also mean property values will remain strong and stable as the number of people moving to a new house (and selling their old property) will continue to remain restricted and hence, due to lack of choice and supply, buyers will have to pay decent money for any property they wish to buy.

Interesting times ahead for the Crawley Property Market!
Posted by Unknown at 16:35