The Crawley Love Affair With Its 18,179 Terraced Houses


Call me old fashioned, but I do like the terraced house.   In fact, I have done some research that I hope you will find of interest my Crawley property market blog reading friends!

In architecture terms, a terraced or townhouse is a style of housing in use since the late 1600’s in the UK, where a row of symmetrical / identical houses share their side walls. The first terraced houses were actually built by a French man, Monsieur Barbon around St. Paul’s Cathedral within the rebuilding process after the Great Fire of London in 1666.  Interestingly, it was the French that invented the terraced house around 1610-15 in the Le Marais district of Paris with its planned squares and properties with identical facades. However, it was the 1730’s in the UK, that the terraced/townhouse came into its own in London and of course in Bath with the impressive Royal Crescent.

However, we are in Crawley, not Bath, so the majority of our Crawley terraced houses were built firstly in the Victorian era and then as a result of the New Town commssion expansion of Crawley.  Built on the back of the Industrial Revolution, with people flooding into the towns and cities for work in Victorian times, the terraced house offered decent livable accommodation away from the slums. An interesting fact is that the majority of Victorian Crawley terraced houses are based on standard design of a ‘posh’ front room, a back room (where the family lived day to day) and scullery off that.  Off the scullery, a door to a rear yard, whilst upstairs, three bedrooms (the third straight off the second).  Interestingly, the law was changed in 1875 with the Public Health Act and each house had to have 108ft of livable space per main room, running water, it’s own outside toilet and rear access to allow the toilet waste to be collected (they didn’t have public sewers in those days in Crawley – well not at least where these ‘workers’ terraced houses were built).

It was the 1960’s and 70’s where inside toilets and bathrooms were installed (often in that third bedroom or an extension off the scullery) and gas central heating in the 1980’s and replacement Upvc double glazing ever since.

And quite noteworthy, there are 10 mobile homes, representing 0.02% of all property in Crawley. 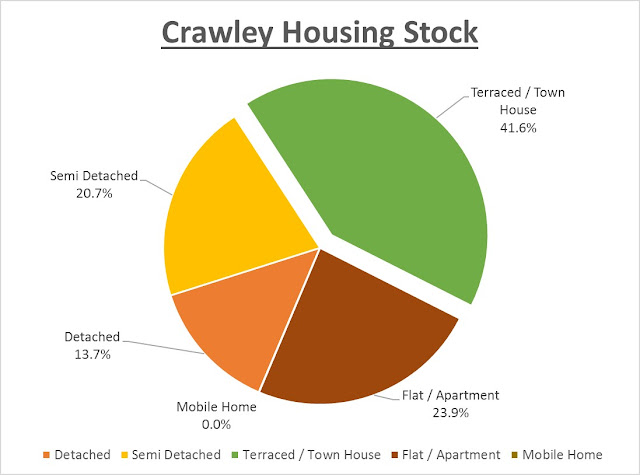 When it comes to values, the average price paid for a Crawley terraced house in 1995 was £56,420 and the latest set of figures released by the land Registry states that today that figure stands at £274,000, a rise of 386% - not bad when you consider apartments in Crawley in the same time frame have only risen by 278%.

But then a lot of buy to let landlords and first time buyers I speak to think the Victorian terraced house is expensive to maintain.  I recently read a report from English Heritage that stated maintaining a typical Victorian terraced house over thirty years is around sixty percent cheaper than building and maintaining a modern house- which is quite fascinating don’t you think!

Don’t dismiss the humble terraced house – especially in Crawley!  For more thoughts on the Crawley Property Market – visit www.mycrawleyhome.com
Posted by Unknown at 13:20