Crawley is already in the clutches of a population crisis that has now started to affect the quality of life of those living in Crawley. There are simply not enough homes in Crawley to house the greater number of people wanting to live in the town and public services almost at breaking point.

To start with, the UK has roughly 1,065 people per square mile – the second highest in Europe. The total area of Crawley itself is 9.410 square miles and there are 106,900 Crawley residents, meaning …

11,300 people live in each square mile of Crawley, it’s no wonder we appear to be bursting at the seams!

A square mile is enormous, so the numbers look correspondingly large (and headline grabbing). Most people reading this will know what an ‘acre’ is, but those younger readers who don’t, it is an imperial unit of measurement for land and it is approximately 63 metres square.

In Crawley, only 16.19 people live in every acre of Crawley … not as headline grabbing, but a lot closer to home and relative to everyday life, and, a figure that doesn’t seem that bad. 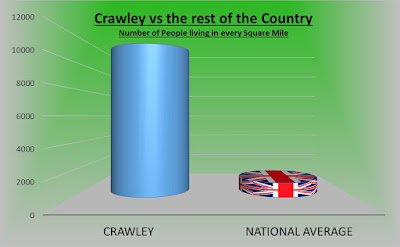 A recent Government report, looking specifically at England (as it is the most densely populated country of the Union), reported that all the 20 million English homes cover only 1.1% of its land mass.

.. leaving 88.5% as Open Countryside (and if you think about it, add to that the gardens, which are green spaces, and the country is 92.8% greenspace)

As a country, we have plenty of space to build more homes for the younger generation and the five million more homes needed in the next 20 years would use only 0.25% of the country’s land.  Nobody wants to see massive housing estates and 20 storey concrete and glass behemoth apartment blocks next to local beauty spots such as Tilgate Park or Buchan Country Park, but with clever planning and joined up thinking, we really do need to think outside the box when it comes to how we are going to build and house our children and our children’s children in the coming 50 years in Crawley.

In the meantime, if you have a question about rental or residential property in Crawley you can contact me in the Martin & Co office in Crawley Town Centre, the phone number is 01293 735000.
Posted by Unknown at 12:16